Your Guide to Zoysia in Holly Springs

For homeowners interested in a quick update to their curb appeal, zoysia (or zoysiagrass) is among one of the most popular grass types. In this article, Peak Sodding provides an in-depth guide to zoysia in Holly Springs. We’ll offer a brief history of zoysia and shed light on the facts and characteristics of the different varieties of zoysiagrass.

A Brief History of Zoysia

Zoysiagrass has been used in America for approximately 125 years, and with it originating in Asia, Australia, and the Pacific islands, it is a viable option for warm-season sodding. This genus of creeping grass is typically found in coastal areas or grasslands, making it a great choice for the Piedmont area.

Zoysia is a warm-season grass that is often used for golf courses or sloped areas that are susceptible to erosion.

Zoysiagrass is found in two-thirds of the southern United States as it can tolerate a wide variety of sunlight, temperature, and water. It is considered one of the most heat-tolerant grasses among warm-season types. Furthermore, this perennial turfgrass is also tolerant to shade and cold weather.

While it is one of the first grass types to go dormant after the first freeze, zoysia will also be the first warm-season grass type to create a lush, green lawn come spring. 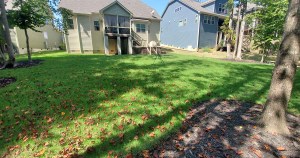 One of the main characteristics of zoysia is the thick, soft blades that create a carpet-like feel. Because it produces stolons (or ‘runners’) that expand horizontally, its dense root system will crowd out weeds, leading to less maintenance once it is established.

Zoysia will adapt to many different soil conditions, including clay, sandy, and loamy soils with acidic and alkaline pH ratings.

Zoysia is a popular choice among households with pets or young children as it holds up well under heavy traffic, and as previously mentioned, feels nice on bare feet.

Thanks to its deep root system, Zoysiagrass is far more drought-resistant than your average grass. Although it may yellow or turn straw-colored when under drought stress, Zoysia’s green color will return when irrigation does.

Pros and Cons of a Zoysia Lawn

While Zoysia is one of the top choices for sodding in Holly Springs, it’s important to look at the pros and cons of establishing a zoysia lawn.

Zoysia is a top choice for homeowners in Holly Springs because we see the most success in installing this type of grass as sod versus seeding. While some zoysia can be installed as seeds more successfully, it is a slow-growing grass type. Without proper, constant maintenance during the seeding and germination stage, just a small percentage of Zoysiagrass seeds will germinate. Seeding zoysia will either require a dedicated watering routine or a sprinkler system until it is completely established, which could take as long as a year to truly promote successfully.

On the other hand, a zoysia-sodded lawn will only require about 1 inch of water per week and won’t need to be mowed until it has reached about 3 to 4 inches. Zoysia sod will provide an established look about one week after installation and its roots will be established within two to six weeks after installation.