What is the Best Variety of Zoysia for my Lawn in North Carolina?

Zoysiagrass is a warm-season grass type that has been used in the Americas for 125 years. Originating in Australia, Asia, and the Pacific Islands, Zoysia is a popular choice for homeowners who want a medium to low maintenance lawn with a lush, deep green color. As one of the most common warm-season species, Zoysia is used in two-thirds of the southern United States.

In this post, Peak Sodding outlines the features and differences between the three most popular varieties for sodding in Holly Springs: Zeon, Empire, and Compadre Zoysia. Finally, we’ll help homeowners decide on the best variety of Zoysia for their North Carolina lawns.

Compared to some of the higher grade Zoysias of Empire and Zeon, Compadre may not boast many of the outstanding qualities of drought/shade tolerance. Do not let that deceive you, while it is a more standard grade Zoysia, Compadre still boasts many of the excellent qualities Zoysia is so well known for. For those who are set on Zoysia, but may not be willing to spend the premium cost associated with the higher grades, Compadre just may be the fit for you. It will thrive in lawns that receive 6 hours plus sunlight daily. It also is very slow-growing, meaning less mowing for you. Its wide grass blades mean it has excellent density and will crowd out many weeds. It grows laterally without the need for seeding and will recover from stress just fine with the proper water encouragement.

Keeping in step with most of the Zoysia varieties, Empire Zoysia is a coarse-bladed cultivar that creates a thick, dark green lawn that is soft to the touch. For those who are looking for a premium grade wide blade variety of Zoysia, Empire is one of the best of its kind. Its deep roots develop and spread rapidly, giving it the ability to grow faster and taller than Zeon. Empire Zoysia is moderately tolerant of shade and has excellent drought tolerance. In the southeastern US, where temperatures are expected to fluctuate from day to day, this heat and cold-hardy grass type is a perfect choice for sod in Holly Springs.

While Empire Zoysia is a great choice for sodding, it is also important to note its shortcomings. Like most Zoysia varieties, Empire is susceptible to brown patch disease and is not a good choice for areas that experience high shade (less than 5 hours daily sunlight)

Zeon is considered by many to be the premium grade of Zoysia and most turf types for that matter. Zeon is known for its deep green color similar to Fescue and offers a dense, fine texture. Unlike Empire Zoysia, Zeon is more tolerant of cold temperatures and is slower to brown in the Winter and quicker to green in the Springtime. Zeon has a higher tolerance against disease and is considered to be more insect resistant than other warm-season varieties. Finally, as a fine-bladed variety of Zoysia, Zeon has been cultivated to build up less of thatch layer over time, meaning even less maintenance and healthier turf across the board.

Both Zeon and Empire Zoysia are fast-growing cultivars, but Zeon will spread less and its final height will be ~1” shorter than the Empire variety. Furthermore, Zeon will take longer to become established and may spread more irregularly than Empire Zoysia.

Which Zoysia is For Me?

When it comes to deciding on the best variety for your lawn in North Carolina, it’s best to look at the side-by-side comparison of both Zeon, Empire, and Compadre Zoysia cultivars. Depending on how quickly you’re looking to establish a lawn, the amount of time you can dedicate to maintaining it, and the level of tolerance to specific elements are all factors to consider. Let’s look at the key point round-up below:

Empire Zoysia is one of the most popular varieties of the past few years. Its great color and cold tolerance are hard to beat! 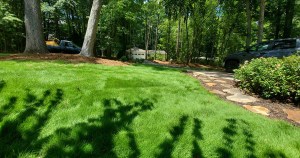 Zeon Zoysia is the gold standard for Zoysia sod. drought tolerant, soft-touch, shade, and cold tolerant, and look at that COLOR!

Choosing the best variety of Zoysia for Holly Springs sodding can be a tough decision for homeowners. Peak Sodding has experience installing both Zeon, Compadre, Empire, and many other varieties of Zoysia, and we’re happy to offer more information to help guide your final decision. Contact us today to find out more about Zoysia sodding and to request a free estimate.